Eat your heart out, Joey Chestnut. There's a new super-speed-eater in town, and she means business.

45-year-old Hatsuyo Sugawara downed an incredible number of 399 bowls of soba noodles in just ten minutes at the annual All-Japan Wanko Soba Eating Championship this past Sunday. The noodle queen calls herself a food fighter, and has been coined "the witch". 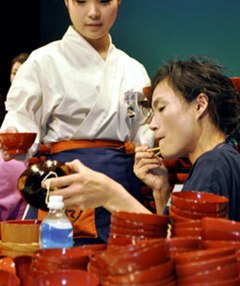 According to the Japan Times,

"Sugawara's win was her third in a row since she joined the competition three years ago. Three consecutive wins in the race mark a milestone, the organizer said.  Last year, Sugawara ate 383 bowls. Because she was a record holder, tougher rules were imposed — she was given only 10 minutes, while others were allowed to keep eating for 15 minutes.

To a majority of participants, however, 15 minutes were far from sufficient. Some turned pale as they kept on pushing the noodles down their throats, while others frequently jumped up and down, hoping gravity would help."

Want to master Microsoft Excel and take your work-from-home job prospects to the next level? Jump-start your career with our Premium A-to-Z Microsoft Excel Training Bundle from the new Gadget Hacks Shop and get lifetime access to more than 40 hours of Basic to Advanced instruction on functions, formula, tools, and more.

Other worthwhile deals to check out:

Join the Next Reality AR Community

Get the latest in AR — delivered straight to your inbox.